Tsiolkovsky and his elevator to heaven

In 1979 the famous British writer Arthur C. Clarke published his novel "The Fountains of Paradise" where some scientists built a very peculiar elevator, which went up to 36 kilometers. What very few people know is that this elevator did not come out of this science fiction writer’s mind. It's actually the invention of a Russian scientist who was born 122 years before the publication of this novel.

Konstantin Eduardovich Tsiolkovsky (1857-1935) had a difficult life from an early age. At the age of 10, a disease made him almost deaf, and it became impossible for him to attend school, so he studied at home. Once he reached the age to start college, he spent three years visiting a library in Moscow where he met one of his workers: Nikolai Fyodorov, father of Russian Cosmism (космизм). This person had such an influence on Tsiolkovsky that from that moment he began his research on rockets and space travel. The Cosmism aimed to overcome death and achieve immortality and suggested that humans should dominate nature and conquer other planets thanks to their scientific knowledge. 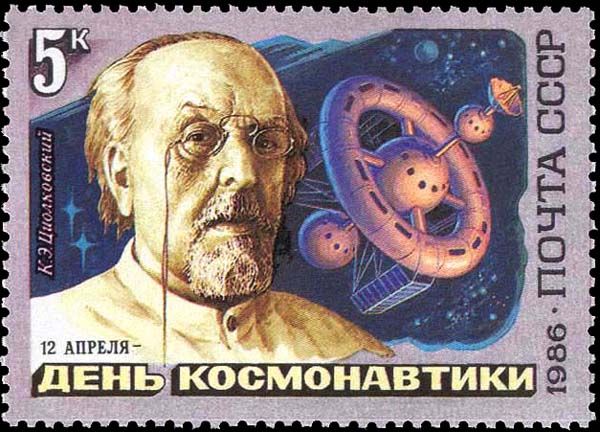 The father of astronautics

Tsiolkovsky was a singular figure, as he was the first scientist to study the possibility of space travel. He died years before any man-made object reached space, and yet his theories contributed to the development of the Soviet space program. He built the scientific side of Russian Cosmism for the sole purpose of providing immortality to man. However, from the 400 works he wrote, only 90 refer to astronautics.

At the time when French writer Jules Verne published his novels, Tsiolkovsky decided to create the scientific method to explain space travel as Verne described in "From the Earth to the Moon". From the beginning, Tsiolkovsky conceived the idea of an armored metal ship that would resist meteorite collisions, and equipped with seats that could withstand high thrust forces. He also developed a suit that would allow the crew go out and breathe in space. In order for this ship to leave Earth, Tsiolkovsky developed the "Tsiolkovsky rocket equation" to calculate the motion of a rocket.

Despite his work, Tsiolkovsky was mocked by his contemporaries, who did not understand the use of his theories and considered him a scientific that had lost touch with reality. This was further aggravated when Tsiolkovsky supported the theory that we are not alone in the universe, and living beings exist on other planets. 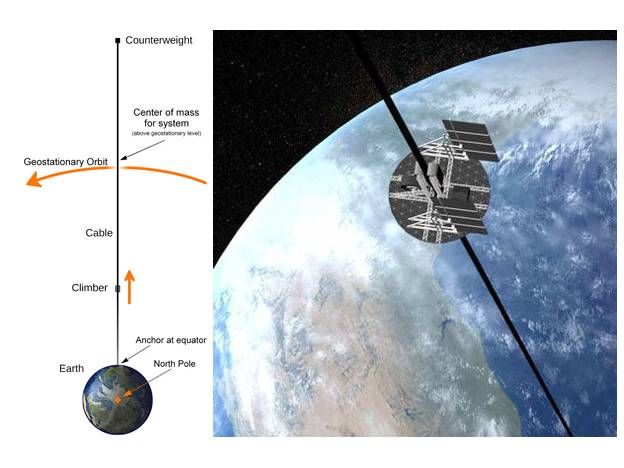 Sketch of the space elevator

The elevator of Arthur C. Clarke

And we finish this article as we started it: the elevator mentioned on "The Fountains of Paradise". In 1895, as the first steps in the construction of the Eiffel Tower were taking place, and noticing the possibility of creating tall buildings that would not fall, Tsiolkovsky developed a great idea. He thought of a simple, quick and inexpensive way to send people into space: the space elevator. Tsiolkovsky already understood that the cost of sending anything into space would be considerable, so he imagined an electric elevator that would also take advantage of the inertia and gravity to save power.

The idea was simple: a 36 km long cable anchored on the Earth Ecuador, with a counterweight at the end and a giant elevator that would rise along that cable. Such a simple concept is very difficult to implement, and Tsiolkovsky himself knew it. He stated that no material could withstand the tensions between Earth and space and, therefore, its use was relegated to science fiction stories... until now.

In 2009, the company LaserMotive LLC was able to lift an object 900 meters cable along a cable suspended from a helicopter, and received a prize of $ 900,000. NASA holds since 2010 a competition with a $ 4 million reward called "Elevator: 2010" for those capable of developing a space elevator. Maybe in a few years Tsiolkovsky‘s dream of conquering new worlds becomes closer, and his theories and inventions can finally leave science fiction books.