Lev Ivanovich Yashin (October 22, 1929 - March 20, 1990) was a Russian goalkeeper regarded by many as the best goalkeeper in the history of football. He was nicknamed the "Black Spider" for two reasons: first, because he used to wear black and second, because he moved so fast it looked as if he had eight arms. During his career, he played in more than 800 games and kept over 270 clean sheets (that is, in 270 matches he did not concede any goals). He also he made over 150 penalty saves, more than any other goalkeeper in history. And he always played for the same team: Dynamo Moscow.

The best goalkeeper in the history of… hockey?

In 1941, when Lev was a 12-year-old child, Germany invaded the Soviet Union and the Great Patriotic War, that is World War II, began. Lev had to work in the same factory where his parents worked to help in the "war effort". There he played with the company’s ice hockey team. However, one day he was asked to substitute the football team’s goalkeeper, and that was when everything started. Shortly afterwards, he was spotted by the talents scouts from Dynamo Moscow football club and was invited to join them. That was a significant step forward for Yashin, although not everything went as planned, as the first matches were a disaster, and he ended up sitting on the bench. In order not to get out of shape, Yashin went on to play with the Dynamo hockey team, with which he won the Soviet Union Cup and finished third in the league. Fortunately for all football fans, the main Dynamo goalkeeper retired in 1953, and Yashin had the chance to return to playing football. 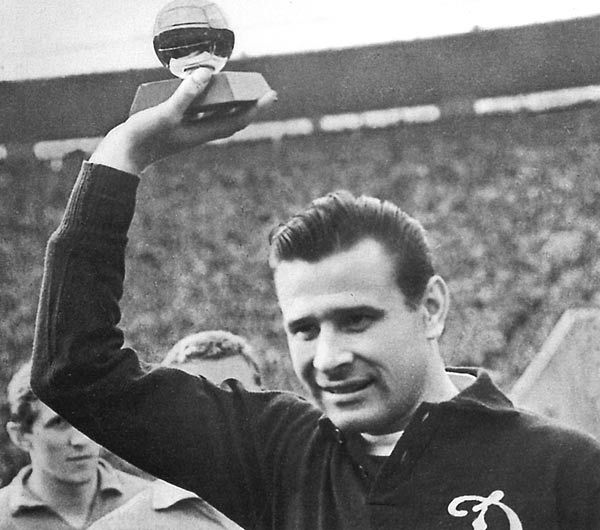 New tactics for a goalkeeper

Back in those days, the position of goalkeeper was seen in a different way as we see it today. When Yashin began playing for Dynamo, a goalkeeper was almost like a third post under the goal. In addition, the height difference between a goalkeeper and any other player barely existed. But Yashin began a revolution. He introduced new practices never seen before, like punching the ball in difficult situations instead of trying to catch it, or quickly throwing the ball to start a counter-attack. He was also one of the first to leave the penalty area to anticipate danger or to give orders yelling to players to organize the defense. These practices are commonplace in today’s football but back then they were very revolutionary. He also introduced one of the biggest changes in every goalkeeper’s clothing when, in the 1958 World Cup held in Sweden, he began wearing gloves.

The man who won it all

Yashin’s marks and records through his career are enough proof of his value as a player. His most notable achievements are:

We finish this article with a quote from Lev Yashin: "The joy of seeing Yuri Gagarin flying in space is only superseded by the joy of a good penalty save."