Today we will talk about some of the most exciting events that happened on any last week of July in the Russian and Soviet history. We will remember the creation of a new language, the imprisonment of one of the best Russian writers in history and one boycott to the Olympic Games. We will also have time to talk about the reduction of nuclear weapons or the first spacewalk performed by a woman.

On July 29, 1985 Soviet Union leader Mikhail Gorbachev announced the unilateral decision from the Soviet government to stop its nuclear tests. The USSR had made since 1949 over 700 nuclear tests in which 980 bombs were detonated, including the largest nuclear weapon in history, the Tsar Bomb, with a power of 50 megatons.

July 31, 1991: the Soviet-American Strategic Arms Reduction Treaty (START-1) is signed. This agreement proposed a radical reduction of nuclear warheads (from 5,000 to 850), mobile launchers and long-range bombers. Part of the treaty included the destruction of 365 B-52 American bombers, which were chopped into five pieces by a 13,000-pound steel blade. The chopped aircrafts remained in place for three months in a field so that Russian satellites could confirm its destruction.

Gorbachev and Bush after signing the START I treaty

The Russian writer Alexander Solzhenitsyn, Nobel Prize for Literature in 1970, is sentenced to eight years in a labour camp for anti-Soviet propaganda on July 27, 1945. He was arrested near the city Konigsberg, today Kaliningrad, where he was serving as a Soviet Army officer in WWII. He served his sentence in different jails until, thanks to his mathematical knowledge, he was transferred to a scientific research center for political prisoners.

July 26, 1887: Russian-born ophthalmologist Ludwik Lazarus Zamenhof published in Warsaw the first book in Esperanto, titled "Lingvo internacia. Antaŭparolo kaj plena lernolibro". This book which can be translated as "International Language. Introduction And Complete Textbook" was published under the pseudonym of "Doktoro Esperanto". This pen-name became the name of the new language that Zamenhof invented to improve communication between the different European nationalities.

Russian cosmonaut Svetlana Savitskaya becomes on July 25, 1984 the first woman to make a spacewalk in history. Savitskaya spent four hours outside the spacecraft Soyuz 7 and was the second woman to go into space in history, 19 years after Russian Valentina Tereshkova. 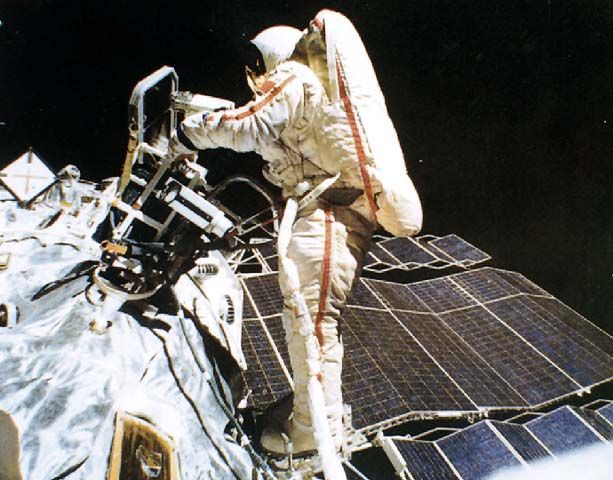 Svetlana Savitskaya during her spacewalk

Boycott to the Olympics

July 28, 1984: USSR refuses to participate in the Olympics in Los Angeles. In total, the Olympic Games in Los Angeles were boycotted by 18 countries. 16 of them did so to protest for the U.S. boycott to the 1980 Moscow Olympics. Apart from that, Libya and Iran took part in the boycott on political grounds. Despite its socialist ideology, Romania did attend the Games and achieved its medal record.