Some other five amazing Russian inventions

In this blog we have told you the exciting story of five Russian inventions that you did not know exist. Today we want to discover some other creations that emerged from great Russian and Soviet minds and pay particular recognition to those thousands of hours spent researching and developing. We also want to include an invention (the plane) which, like many others, has a long list of potential inventors.

The idea of an armored vehicle is almost as old as the war itself. Even the great Renaissance genius Leonardo da Vinci designed on paper a war vehicle over 500 years ago. The first tank as we understand it today was designed and built by the Russian designer Aleksandr Porokhovschikov in 1915 and it was called Vezdekhod (Вездеход).

The Vezdekhod was the first armored vehicle in the world with turret and caterpillar track which resembled what we today call a tank. A prototype was built and was well received. And although it completed all tests successful, the project was largely forgotten because of the October Revolution of 1917, which stopped almost every imperial project. It was not built in mass, but we can certainly say that it was the first tank in the world, and it came out of a Russian workshop. 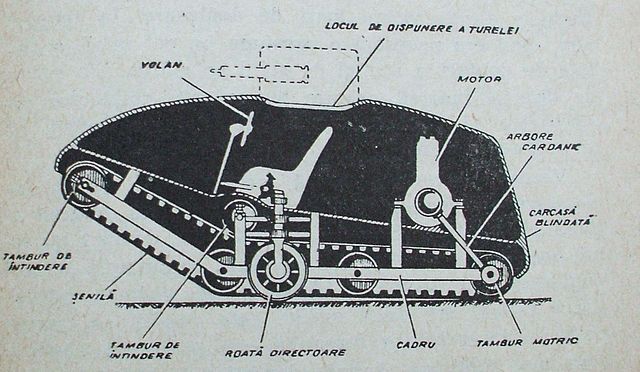 Design of the Vezdekhod, the first tank in the world

Maybe for those of you who live in warm areas this invention is not very important, but in many countries around the world the radiator is an essential part of a comfortable life. The person responsible for this design was a Russian businessman called Franz San Galli, who in 1855 created a system of hollow tubes with circulating hot water which could heat rooms. The first radiator started working at San Galli’s home in St. Petersburg in 1855. Today it is present in almost every home around the world.

If you open an encyclopedia and read about the history of aviation, you will certainly find a chapter devoted to the Wright brothers. These two American brothers made an experimental flight with a plane called the Kitty Hawk in 1903.

The Wright brothers went down in history as the fathers of modern aviation, but you might be surprised to find out that 21 years earlier an airplane started its engine and flew in a different part of the world. The author of this feat was Alexandr Mozhaiski, a Russian inventor whose plane took off in a field in Krasnoye Selo, near St. Petersburg. The flight was very bumpy, because the two steam engines with a total power of 30 horsepower were barely able to make the plane rise. But truth is, the plane managed to take off and land.

The most famous perfume world

Very few fragrances become museum pieces, with their own space in the Metropolitan Museum in New York. But here we are talking about the world famous Chanel No. 5. Even though its name sounds like something truly French, the author of this fragrance was actually the Russian perfumer Ernest Beaux, who was born in Moscow. The Beaux family had been living for two generations in Russia when the young Ernest created one of the most famous perfumes in history.

Ernest Beaux met French designer Coco Chanel thanks to her lover, the Grand Duke Dmitri Pavlovich. Both the Duke and Beaux had fled Russia because of the civil war that followed the Russian Revolution of 1917. The friendship between the Russian perfumer and the French designer led to the creation in 1921 of a perfume which at first was intended only as a gift for some of Coco Chanel’s clients and eventually became a twentieth century icon. And how did they come up with that name? Simply because when Ernest Beaux presented Coco Chanel different fragrances for the new perfume, she chose the fifth option.

One important element during the Cold War to show power were missiles that could travel thousands of miles in the upper layers of the atmosphere and drop their nuclear content with no way to stop them. Those were known as ICBM (intercontinental ballistic missile). The first weapon of its kind was the R7 created by Soviet Sergei Korolyov, who finished his missile project in 1954.

This missile caused panic in the United States because the American project, called Atlas, was not yet in production. Fortunately, the high cost of R7 units led to the Soviet Union never having more than ten missiles operational and ready to use. But the design of the R7 had a more exciting and peaceful life in the space race. Its nuclear capability was eliminated, and it was used as a rocket for the Soviet space missions, including the launch of Sputnik.

We all love stories about inventions and inventors. Do you know the story of any interesting Russian invention? Join our Russian forum and talk about it there:
http://forum.redkalinka.com/viewtopic.php?f=11&t=314