The White Rose of Stalingrad

A "flying ace" is a military pilot credited with shooting down five or more enemy aircrafts in combat. In the history of aerial warfare, there have been only two women who have reached this category. Both were Russian and fought together in World War II. One was Katya Budanova (ЕкатеринаБуданова) who achieved 11 victories and the other was Lidiya Litvyak (ЛидияЛитвяк), known as the White Rose of Stalingrad, who scored 12.

A woman in a man's world

Lidiya knew since childhood that she wanted to be a pilot. She was born in Moscow in 1916, when she was fourteen she already was a member of a flying club, at fifteen she piloted a plane for the first time and shortly afterwards she became a flying instructor. After the German invasion of the Soviet Union in 1941, the USSR needed all the pilots that the country could offer, regardless of them being civilians or military, men or women. Lidiya signed up as a volunteer but had to lie about her flight time experience.

At the beginning of the war, Soviet military leaders were unsure about having women fly military aircrafts. Although there were no general differences in the Red Army between men and women, aviation was still a gentlemen’s private club. But when Germany succeeded in breaking through the Soviet defenses and the German planes began shooting down an increasingly number of aircrafts, it was decided that women pilots were going into battle. 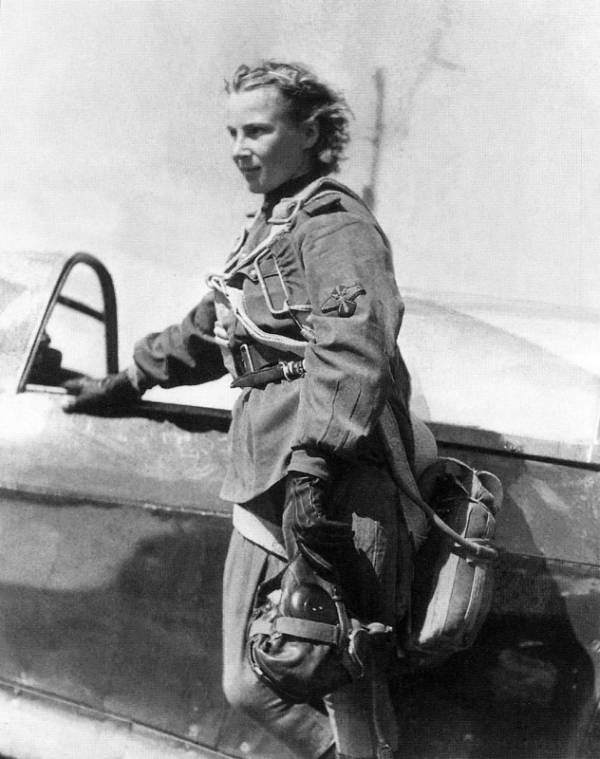 The White Rose of Stalingrad

Lidiya became part of combat missions in the summer of 1942 and soon afterwards she rose to prominence for her aggressive flying. His colleagues saw her as a girl in the chaos of war. She used to decorate her cockpit with flowers and wore scarves made from the fabric of parachutes. Her height was an added problem, and her mechanic had to adapt her aircraft’s seat so she could reach the controls. However, soon her ability in combat earned her the respect of her peers and the fear of her enemies.

Lidiya Litvyak shot down her first enemy on September 13, 1942 at Stalingrad. That same day she defeated the aircraft of German General Erwin Maier, an expert pilot, a flying ace and a three-time recipient of the Iron Cross. Maier could parachute from his plane and save his life, but he was captured by the Soviet army. That day he asked to meet the pilot who had shot him down. When Lidiya came, he thought it was a joke.

Lidiya liked being called Lilya (Лилия, lily), and she painted a white lily on the side of her plane. From a distance, some thought that it was a white rose and thus she started being known as the White Rose of Stalingrad. During her military career, she shot down twelve aircrafts in solo missions and four in joint missions in a total of sixty-six combat missions. During that time she was also shot down twice and was also seriously wounded, but she always managed to recover and go back to combat.

During the Battle of Kursk, which took place in July and August of 1943, the Germans were determined to defeat her. Her plane was easy to spot because of the white lily, but she always refused to remove it. On August 1, 1943 a group of German planes spotted her and dived to attack. She shot down two of them before disappearing together with her aircraft. Lidiya was only 21 years old.

The mystery of the White Rose of Stalingrad

Lidiya Litvyak was declared missing in action, and her body was not found. In those years, the government of Stalin regarded all missing in action soldier as traitors because they assumed that it was because they had deserted to the enemy. This prevented Lidiya from being awarded the title of Hero of the Soviet Union.

This injustice led to a 36-year search of Lidya’s body by her mechanic and friend Inna Pasportnikova. In 1979 she finally located the place where Lidya had been buried and an inspection of the body certified that it was Lidiya. On May 6, 1990, when the USSR was close to disappearing, Mikhail Gorbachev posthumously awarded Lidiya Litvyak the Gold Star of Hero of the Soviet Union. Lidiya is in the Guinness Book of World Records as the woman with the most kills in the history of aviation.

Let's talk about the role of women in history: Do you think that women in Russia and the USSR played more important roles than in other countries? What other Russian / Soviet women have made history?