The Tsar weapons: the biggest in history

Despite the title, this article is not devoted to the private arsenal of the Russian tsars. Throughout history, there has been a number of weapons that have taken the name of "Tsar", and not because of their owner, but because of its size and destructive capacity. In other words, today we will talk about huge weapons in Russian history.

We will start this journey with the oldest device. The Tsar Cannon (Царь-пушка) with its 890 mm caliber it is the largest cannon in history. And although we call it a cannon, technically it is a mortar. It was cast in 1586 by order of Theodore I, son of Ivan "the Terrible". As a curious fact, Ivan IV the Terrible was the first Russian ruler who used the title of “tsar”.

It is unclear whether the Tsar Cannon was ever shot, if it was built only for ornamental purposes or if it was meant to be taken to the battlefield to demoralize the enemy with its size. Thanks to its enormous caliber, it could have shot 2.000 kg cannonballs at a distance of about 500 meters, which would make it a perfect weapon to destroy defensive walls.

Today the Tsar Cannon is on display in the Kremlin in Moscow. It happens to be not far from the "Tsar Bell" (Царь-колокол), the largest bell ever made. 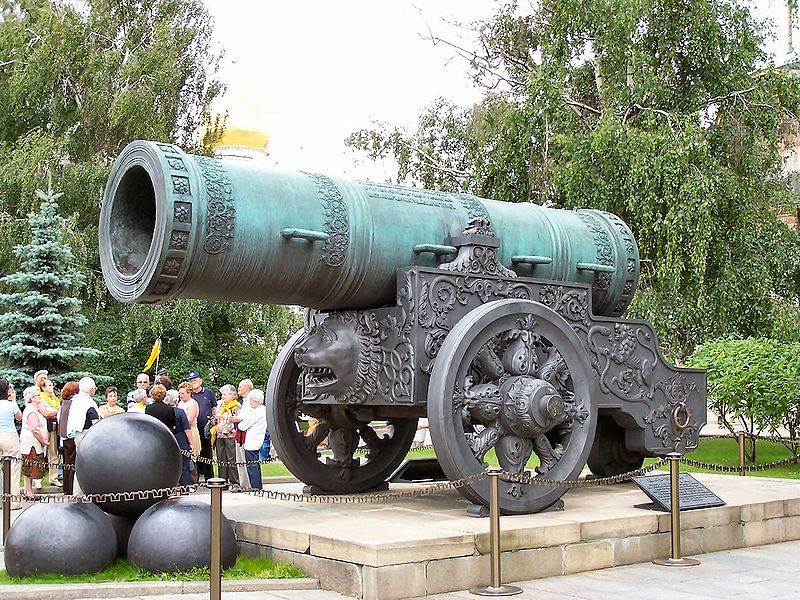 Tsar Cannon in the Kremlin

The Tsar Tank (Царь-танк) also known as the Netopyr (Нетопырь) was one of those projects that seem to be a great idea at first but once built are a complete failure. The Tsar Tank was born between 1914 and 1915 in response to modern warfare in which the cavalry was already obsolete.

This armoured vehicle was meant to be more than a tank, rather something like a land battleship. Like the Navy battleships, the Tsar Tank would have big guns and instead of having a single turret with a cannon, it would be built with a main turret with two cannons and a secondary turret with two machine guns.

Regarding its size, it was bigger than any tank ever built before: 18 meters long, 12 meters wide and with a weight of 40 tons. Instead of caterpillar tracks, it had a peculiar system that resembled that of a tricycle, with two giant wheels of 9 meters in diameter and three smaller ones. At the time of design, it was expected that such large wheels would help the tank go over any trench. But when testing the prototype, reality hit hard. Due to the tank's weight, it had to move very slowly so it would have been an easy target for the artillery. Also, its wheels got easily stuck in soft ground and it would go up slopes with difficulty. On top of that, production cost would have been extremely high.

The first prototype of the Tsar Tank was abandoned in the test area, 50km from Moscow where it rusted for years, until it was taken apart for scrap 1923.

The grand finale of this collection is the ultimate weapon, so powerful that not only could have ended a war, but also could have meant the death of millions. The Tsar Bomb (Царь-бомба) was the culmination of all research on atomic bombs done in the Soviet Union.

The Tsar Bomb effectively used nuclear fusion and fission to reach the incredible power of 100 megatons. That’s 100 million tons of TNT. This explosion would have completely vaporized the blasting area, and the subsequent acid rain and nuclear pollution would have affected the population of not only in the USSR but much of Europe. To avoid this problem, its power was reduced to about 50 megatons and the uranium device that should initiate the fission was removed, placing lead instead.

The Tsar Bomb was dropped from a bomber on Novaya Zemlya (an archipelago located in the Russian Arctic) in 1961 and detonated at 4.200 meters above sea level. The results were impressive: the blast shattered window panes located up to 900 kilometers away, its shockwave went three times around Earth, it created a fireball of more than 3 km in diameter and a 64 kilometer mushroom cloud appeared. The blast was 3,800 times more powerful than that of Hiroshima. In fact, this bomb alone released more energy than all bombings in World War II combined, including the atomic bombs of Hiroshima and Nagasaki.

Soviet leader Nikita Khrushchev joked about the power of the Tsar Bomb saying that they had reduced its power by half to not shatter all windows in Moscow. This was the most powerful nuclear explosion in history and a second Tsar Bomb was never built. 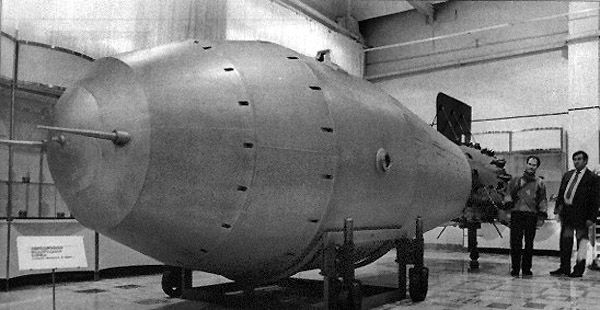 Reproduction of the Tsar Bomb

We have seen weapons that have taken the name of Tsar due to its remarkable size or power. Can you think of other Russian or Soviet weapons that should also carry the Tsar’s name?