The Russian salad and its mysterious recipe

Did you know that nobody knows the exact recipe for the Russian salad? One of the most popular salads in the world was created 150 years ago in a fancy restaurant in Moscow and, although many tried to steal its recipe, nobody could, and its secret was lost forever. This is the story of this Russian dish that people enjoy all around the world.

The story of the Olivier salad

Most of you know it as Russian salad, but some still call it by its original name: Olivier salad. The story of this dish has the flavour of a mystery novel. For starters, it is not known if the chef who invented his recipe, was French, Swiss or Belgian. The truth is that he spoke French and was an expert in French cuisine. In 1860 he opened an expensive restaurant in Moscow, "The Hermitage". Of all the dishes served there, the most popular was a salad which consisted of a rich blend of ingredients with a special sauce that made it irresistible. The dish was named after the chef: Olivier salad.

Nobody knew the recipe of the salad and Olivier had a separate room in the kitchen of the restaurant where no one else had access. That is where he secretly prepared his delicious creation, so no one could find out its recipe. The salad became so famous, that Tsar Alexander II himself was at the Hermitage to try it. In 1883 Lucien Olivier died and took the secret of his dish to his grave, as he never wrote the recipe, and none of his assistants saw how he prepared it. His restaurant, The Hermitage, finally closed in 1905. 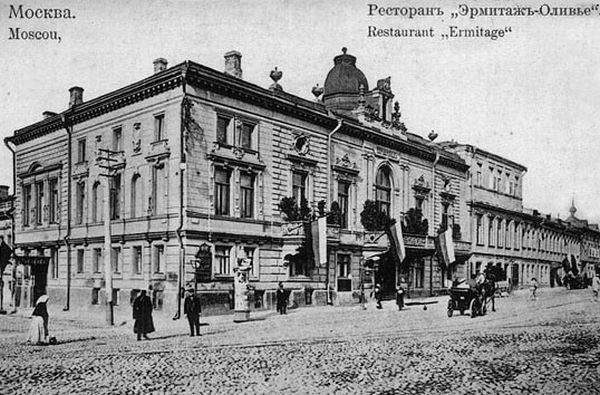 What are the ingredients of the Olivier salad?

The Olivier salad was a dish created for the taste of the noble and wealthy Russians who so much loved French culture in the late nineteenth century. The important thing for its success was to put together very exclusive and expensive ingredients that made the dish something only available to the wealthy. The Olivier salad met all these requirements, and we might even find it quite an extravagant dish.

This dish could have up to 100 different ingredients. Among them were lobster, caviar, venison, pheasant and other expensive kinds of meat. To all this Oliver would add boiled egg, pickles and potatoes, among other ingredients, cut into very small pieces. Finally, the great secret was added to the mixture: the sauce. The dressing was a kind of mayonnaise with many different herbs and probably mustard that mixed very well with the rest of the salad to make it delicious.

As we have seen, the chef Olivier elaborated his most precious recipe in a private room where no one could come in while he was working. But one day, while preparing a salad, he had to leave the restaurant and left the door open. One of his assistants, Ivan Ivanov, took advantage of the situation and came into Oliver’s private room, where he saw everything on the table. The secret was before his eyes, but he could not know in what proportions he had to use each ingredient. Yet he could make an assumption of how the salad was prepared.

After that episode, Ivanov quit his job at the Hermitage and went with his recipe to a different restaurant: the Moskva. There he became the chef who brought to the world a suspiciously similar salad, which he called Stolichny Salad (Capital Salal). This salad is still consumed today, and it is also known as muscovite salad. This is an imitation of the original Olivier salad, but with simpler ingredients. 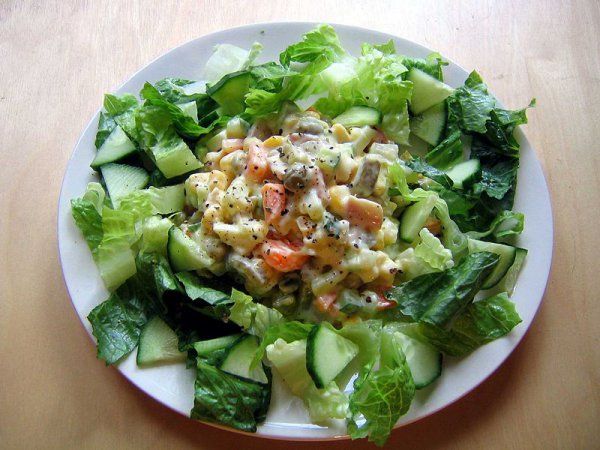 The Olivier salad became so famous that many countries started doing their own version. The most expensive ingredients were removed and replaced by cheaper ones depending on the country where you prepare it: tuna, peas, carrots, etc... In many countries, the Olivier salad is known as Russian salad or potato salad, while others keep its original name of Olivier salad.

In Russia it is a typical dish on New Year's Eve and on many other occasions. There is also a version in the form of a very typical summer cold soup called okroshka. This soup takes the same ingredients as the Olivier salad, to which you have to add a popular Russian drink called kvass, which gives it a different flavor.

What ingredients does the Russian salad have in your country?